PITTSBURGH, Feb. 15, 2021 – A paper published today in Nature shows how chemicals in the areas surrounding tumors—known as the tumor microenvironment—subvert the immune system and enable cancer to evade attack. These findings suggest that an existing drug could boost cancer immunotherapy.

The study was conducted by a team of scientists at UPMC Hillman Cancer Center and the University of Pittsburgh School of Medicine, led by Greg Delgoffe, Ph.D., Pitt associate professor of immunology. By disrupting the effect of the tumor microenvironment on immune cells in mice, the researchers were able to shrink tumors, prolong survival and increase sensitivity to immunotherapy. 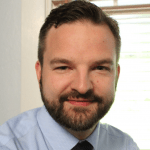 “The majority of people don’t respond to immunotherapy,” said Delgoffe, a member of the Tumor Microenvironment Center at UPMC Hillman. “The reason is that we don’t really understand how the immune system is regulated within this altered tumor microenvironment.”

The immune system is made up of many kinds of cells, chief among them T cells. One type, called killer T cells, fights off invaders, such as viruses, bacteria and even cancer. Another type, called regulatory T cells, or “T-reg cells” for short, counteracts killer T cells by acting as protectors of the cells that belong to the body. T-reg cells are important for preventing autoimmune diseases, such as type I diabetes, Crohn’s disease and multiple sclerosis, where overactive killer T cells assault the body’s healthy tissues.

In short, Delgoffe’s team found that tumors gobble up all the vital nutrients in their vicinity that killer T cells would need to attack. Further, they also excrete lactic acid, which feeds the regulatory T cells, convincing them to stand guard. T-regs can turn the lactic acid into energy, using a protein called MCT1, so nuzzling up with the tumor is a good way for these immune cells to stay fed.

“What better way to recruit a cell than food?” Delgoffe said.

Then, using mice with melanoma, the researchers found that silencing the gene that codes for the MCT1 protein caused tumor growth to slow down. The mice also lived longer.

“We starved the T-regs,” said Delgoffe. “When T-reg cells are not being sustained by the tumor, killer T cells can come in and kill the cancer.”

Importantly, when Delgoffe’s team combined MCT1 inhibition with immunotherapy, the anti-cancer effects were stronger than either strategy alone.

Clinically, the same effect might be achievable using drugs that inhibit MCT1—one of which is currently being tested in people with advanced lymphoma, and it appears to be well-tolerated.

UPMC Hillman Cancer Center, ranked 7th by U.S. News & World Report in 2019 for excellence in cancer care, is the region’s only National Cancer Institute-designated Comprehensive Cancer Center and is one of the largest integrated community cancer networks in the United States. Backed by the collective strength of UPMC and the University of Pittsburgh School of Medicine, UPMC Hillman Cancer Center has nearly 70 locations throughout Pennsylvania and Ohio with cancer centers and partnerships internationally. The more than 2,000 physicians, researchers and staff are leaders in molecular and cellular cancer biology, cancer immunology, cancer virology, biobehavioral oncology, and cancer epidemiology, prevention, and therapeutics. UPMC Hillman Cancer Center is transforming cancer research, care, and prevention — one patient at a time.

About the University of Pittsburgh School of Medicine

As one of the nation’s leading academic centers for biomedical research, the University of Pittsburgh School of Medicine integrates advanced technology with basic science across a broad range of disciplines in a continuous quest to harness the power of new knowledge and improve the human condition. Driven mainly by the School of Medicine and its affiliates, Pitt has ranked among the top 10 recipients of funding from the National Institutes of Health since 1998. In rankings recently released by the National Science Foundation, Pitt ranked fifth among all American universities in total federal science and engineering research and development support.

Likewise, the School of Medicine is equally committed to advancing the quality and strength of its medical and graduate education programs, for which it is recognized as an innovative leader, and to training highly skilled, compassionate clinicians and creative scientists well-equipped to engage in world-class research. The School of Medicine is the academic partner of UPMC, which has collaborated with the University to raise the standard of medical excellence in Pittsburgh and to position health care as a driving force behind the region’s economy. For more information about the School of Medicine, see www.medschool.pitt.edu.