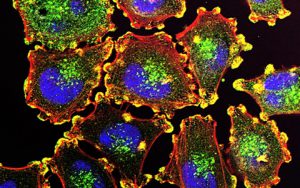 Viruses are the cause of approximately 15% of human cancers. CVP is dedicated to research on the viruses causing human cancer as well as using viruses as tools to fight cancer. The study of tumor viruses has led to important discoveries in cancer research, including the identification of numerous oncoproteins and tumor suppressor proteins critical for the development of all cancers. Of the seven tumor viruses known to cause human tumors, the two most recently discovered cancer viruses, Kaposi’s sarcoma-associated herpes virus (KSHV) and Merkel cell polyomavirus (MCV) were found by researchers in the Hillman Cancer Virology Program. Discovery of MCV at UPMC Hillman Cancer Center as the causative agent in most Merkel cell carcinomas (MCC) has represented the culmination of several years of interdisciplinary research.

CVP provides broad-ranging expertise in tumor virology and has matured into an internationally recognized center for tumor virus research with expertise on basic mechanisms of viral tumorigenesis, viral genomics, microRNA, circRNA, epitranscriptomics, epigenetics, cancer metabolism, inflammation, and immune signaling in cancer. These diverse research interests have naturally evolved into long-term collaborations with other Hillman programs like the Genome Stability Program, Cancer Epidemiology and Prevention Program, and the Cancer Immunology and Immunotherapy Program, and with Hillman investigators involved with several collaborative grants including the Specialized Program in Research Excellence (SPORE) in Skin Cancer and the SPORE in Head and Neck Cancer. 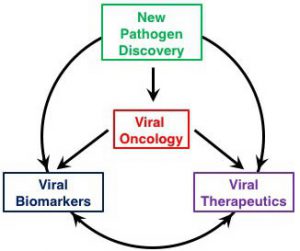 The goal of this research group is to delineate the basic mechanisms used by viruses to initiate cellular transformation and carcinogenesis. The outcomes can lead to the identification of novel therapeutic targets and biomarkers, and also inform our insights into non-viral causes of cancer, e.g., the discovery of MCV-induced CDK1 phosphorylation of 4E-BP1 in cellular transformation. Viral Oncology research has led to discoveries of novel mechanisms of oncogenesis of viral cancers which have become the basis for developing novel therapeutic approaches and agents for cancer.

Virus-encoded antigens can be used as immunogenic proteins to enhance immunologic therapies against cancers. An example of this is the development of a modified oncolytic herpes simplex virus type 1 (HSV1) targeting EGFR+ tumor cells for the treatment of glioblastoma. Recent research conducted by Cancer Virology Program members led to discoveries of several therapeutic agents that have shown anti-tumor effects in preclinical models and developed oncolytic viruses, some of which have progressed into clinical trials. The goal of Viral Therapeutics research is to identify novel therapeutic targets and agents for viral cancers, as well as make use of viruses as oncolytic therapies and to deliver therapeutic genes to inhibit tumor growth or stimulate immunity.

Cancer Virology members continue to identify novel diagnostic and prognostic biomarkers of both viral and cellular origins for viral cancers, the significance of which could allow the use of biomarkers for detection and guidance of therapy to benefit patients. The identification of novel EBV and KSHV circRNAs as potential biomarkers of viral cancers is one example of our Viral Markers research.

Seven viruses have been confirmed to cause approximately 15% of human cancer. While next generation sequencing (NGS) has not yet yielded any more cancer viruses, additional efforts are required before a final conclusion can be reached. Developing novel approaches could help identify (1) new cancer viruses employing specific mechanisms of oncogenesis such as “hit-and-run”, (2) tumor-promoting viral microbiomes, and (3) common viruses associated with cancer in specific conditions that evade detection of cancer association because of their universal prevalence. The goal of this theme is to develop and use cutting-edge technologies to discover new cancer viruses. Examples of similar recent technological discoveries include digital transcript subtraction (DTS) and the Pan-Polyomavirus Immunohistochemistry Test (P-PIT), both of which have been successfully used to identify new viral causes of cancer. The identification of novel viral etiologies of cancer could lead to better understanding of oncogenesis and provide the foundation for developing novel biomarkers, therapies and prevention strategies for tumor virus infection and cancer.