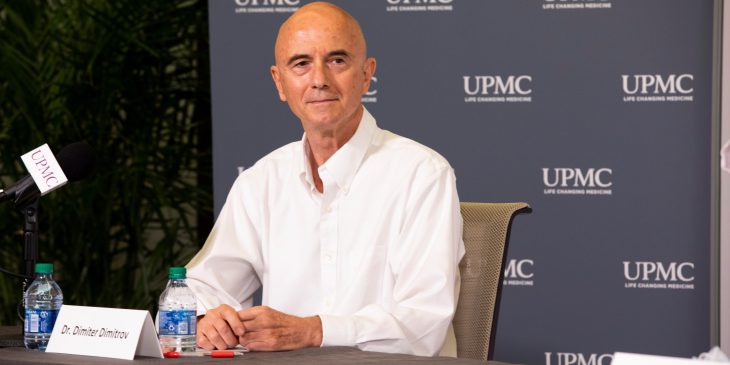 Through a novel combination of immunotherapy and small molecule drugs, an ongoing collaboration between scientists in Pittsburgh and China is developing the future of cancer treatments.

Dr. Dimiter Dimitrov, director of the Center for Antibody Therapeutics at the University of Pittsburgh, teamed up with researchers from Tsinghua University in China to identify a cellular protein that regulates immune cell activity critical to defend against cancer. They also found a way to improve current treatments for solid cancer tumors by combining small molecule drugs with monoclonal antibody treatments.

The promising findings, recently described in papers published in Science Translational Medicine and Cancer Cell, became the foundation for a joint venture between companies founded by Dimitrov (with cofounder Dr. John Mellors) and his collaborator, Dr. Xuebin Liao, professor at the School of Pharmaceutical Sciences at Tsinghua University (with cofounder Dr. Yan Zhang). The companies, Abound Bio and Yufan Biotechnologies, are developing their new cancer treatment strategy for clinical testing.

“This is a great example of how scientific collaboration between different universities can lead to biotech company partnerships and ultimately benefit patients,” said Dimitrov. “In many cases, solid cancer tumors remain untreatable, and finding a new approach that contributes to therapies is very exciting.”

Our immune system protects our bodies from infections and kills cells that have the potential to turn into cancer. But, activated for a long time, immune response loses its strength, allowing cancer a chance to escape and progress.

A subset of immune cells, called T cells, plays a key role in immune response and represents the first line of defense against the threat of cancer or pathogen invasion. But these cells can’t stay active indefinitely – like people burning out from continuous stress, T cells’ ability to respond to pathogens gets depleted the longer the pathogen is present. Overtime, T cells become “exhausted,” losing their potential to attack and kill pathogens and clear out malignant cells.

Teaching a patient’s own immune cells to recognize cancer is an active area of research. This is done by drawing a patient’s blood and isolating their T cells. Those cells are then genetically altered to express so-called Chimeric Antigen Receptors (CARs), which recognize key proteins on the surface of a patient’s unique cancer cells, and returned into the body. This way, scientists can train the immune system to kill cancer while leaving the rest of the body intact.

However, these genetically manipulated T cells can become exhausted, too.

Turning off HPK1 can help T cells go through this cycle many more times, allowing the immune system to kill more cancer cells, the researchers found.

The findings represent a keystone of the collaboration between Abound Bio and Yufan Biotechnologies.

Dimitrov and Liao hope to improve existing strategies for cancer management by engineering antibodies against targets on the surface of solid cancer tumors and using them to guide activated patient T cells. Deleting HPK1 in T cells and adding a small molecule drug like D18 can make the therapy even more effective, scientists think.

“It is very rare to see a therapy that combines small molecules with antibodies,” said Dimitrov. “Controlling the tumor environment with small molecules and engineering T cells that are resistant to rapid inactivation holds big promises for the future.”