PITTSBURGH, Dec. 1, 2020 – UPMC Hillman Cancer Center received an “exceptional” score, the highest achievable rating, and its largest grant to date when it was recently renewed as a National Cancer Institute (NCI)- designated Comprehensive Cancer Center for another five-year period.

The award also includes a five-year, $30 million grant to be used to advance the groundbreaking research that serves as the foundation for the UPMC Hillman’s nationally ranked patient care.

UPMC Hillman Cancer Center, working in partnership with the University of Pittsburgh, is among an elite group of just 51 cancer centers with this designation in the U.S. and the only such center in western Pennsylvania.

“The NCI renewal is an incredible accomplishment because it involves a rigorous year-long review of our programs and indicates that we’ve reached the highest achievements in laboratory and clinical cancer research, not just regionally but nationally and internationally,” said Robert Ferris, M.D., Ph.D., director of UPMC Hillman. “It is a great credit to our phenomenal scientists and oncologists across all disciplines for advancing their fields with practice-changing discoveries.”

As an NCI-designated Comprehensive Cancer Center, UPMC Hillman is recognized for its scientific leadership and for dedicating significant resources toward developing research programs, faculty and facilities that lead to innovative approaches to cancer prevention, diagnosis and treatment. 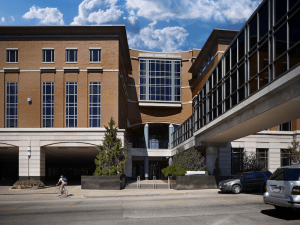 UPMC Hillman and Pitt investigators have demonstrated significant advances in cancer biology, cancer immunology and immunotherapy, cancer virology, biobehavioral cancer control, cancer epidemiology and prevention, cancer therapeutics and genome stability. Over the past 30 years, these scientists and physicians have pushed the boundaries of cancer research and clinical care, including:

“UPMC Hillman Cancer Center, together with the University of Pittsburgh, has made exceptional efforts to integrate cancer research and clinical care to drive next-generation therapies that have saved lives and improved the quality of life for patients around the world,” said Anantha Shekhar, M.D., Ph.D., senior vice chancellor for the health sciences and dean of Pitt’s School of Medicine.

For patients, an NCI Comprehensive Care Center provides promising new therapies, clinical trials and a care program focused on excellence. With nearly 80 community cancer centers in Pennsylvania, Ohio, New York and Maryland, as well as centers in Ireland and Italy, UPMC Hillman is one of the largest integrated cancer networks. It is home to more than 2,000 physicians, researchers and staff, who offer more than 500 clinical cancer trials throughout the vast Hillman network.

“Our vision of creating cancer centers with expert physicians and staff who care for patients close to home has been a continual effort over many years,” said Stanley M. Marks, M.D., chairman of UPMC Hillman Cancer Center. “We realized early on that we didn’t want our patients to travel while dealing with the burden of cancer treatment, and now those centers are able to offer the latest treatments and clinical trials, many of them developed by our own scientists, to patients throughout the network.”

UPMC Hillman Cancer Center received its first NCI designation in 1990 and has been granted renewal every five years since.

UPMC Hillman Cancer Center is the region’s only National Cancer Institute-designated Comprehensive Cancer Center and is one of the largest integrated community cancer networks in the United States. Backed by the collective strength of UPMC—which is ranked No. 15 for cancer care nationally by U.S. News & World Report – and the University of Pittsburgh School of Medicine, UPMC Hillman Cancer Center has nearly 80 locations throughout Pennsylvania, Ohio, New York, and Maryland, with cancer centers and partnerships internationally. The more than 2,000 physicians, researchers, and staff are leaders in molecular and cellular cancer biology, cancer immunology, cancer virology, biobehavioral cancer control, and cancer epidemiology, prevention, and therapeutics. UPMC Hillman Cancer Center is transforming cancer research, care, and prevention — one patient at a time.