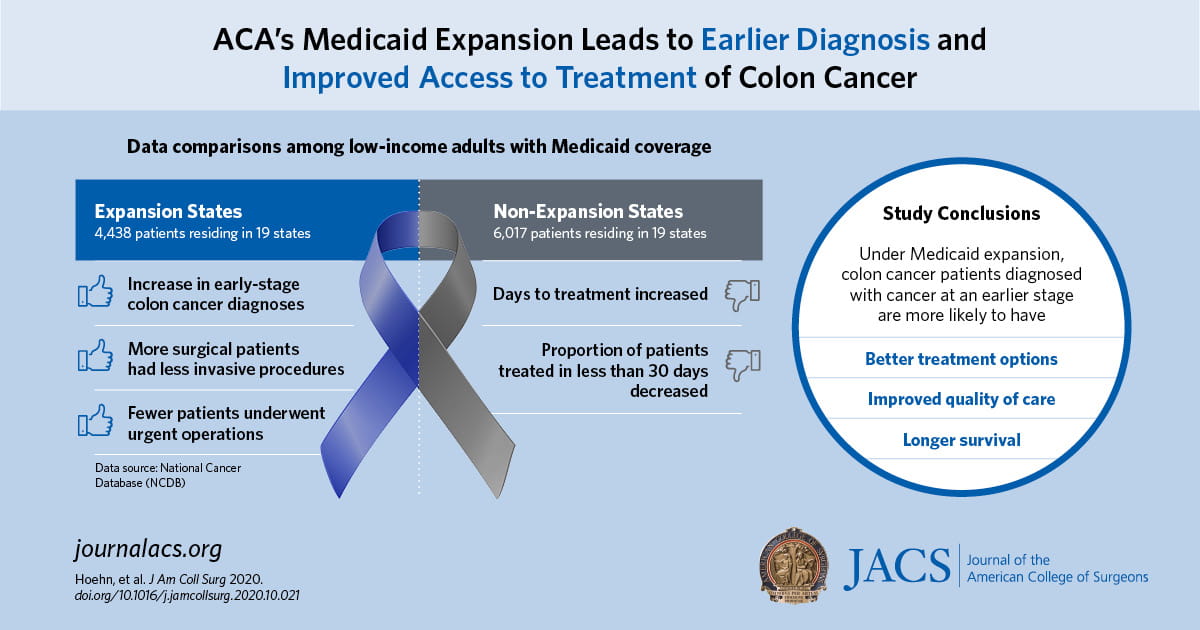 The Affordable Care Act’s Medicaid expansion for low-income people appears to lead to earlier diagnosis of colon cancer, enhanced access to care and improved surgical care for patients with the disease, according to research by the University of Pittsburgh School of Medicine and UPMC Hillman Cancer Center.

The study, published on the Journal of the American College of Surgeons website in advance of print, found that in states that expanded Medicaid coverage effective  Jan. 1, 2014, early-stage colon cancer diagnoses increased compared with states that did not implement Medicaid expansion at that time. More surgical patients from states with Medicaid expansion had minimally invasive procedures, and fewer underwent urgent operations than in states that did not implement the expansion.

“While there are a few studies on how Medicaid expansion affects cancer treatment and outcomes, our study further analyzed data from people who were most likely affected by the Medicaid expansion and they are those aged 40 to 64 and who either had Medicaid or no health insurance,” said study lead author Richard Hoehn, surgical oncology fellow in the UPMC Department of Surgery.

Colorectal cancer is the fourth most common cancer in the United States. Despite the availability of colonoscopy screening, the American Cancer Society reports that 1 in 3 Americans who should receive this screening do not, for reasons that include inadequate health insurance.

Using data on invasive colon cancer collected from the National Cancer Database, the largest cancer registry of its kind, the study compared data for 4,438 patients from the 19 states that implemented expansion in January 2014 with data for 6,017 patients in the 19 non-expansion states. To estimate the relative effect of the expansion policy, they selected the years 2011–2012 to assess data before expansion and 2015–2016 for post-expansion data.

The investigators found no significant differences for postoperative outcomes, such as hospital length of stay, readmission rates and deaths. However, patients with stages I to III colon cancer differed in the timeliness of care based on their state expansion category. In non-expansion states, the days to treatment were longer, and the proportion of patients treated in fewer than 30 days was lower than those in the expansion states.

“Our findings suggest that Medicaid expansion has enabled more previously uninsured people to see a primary care physician and get screened for colon cancer,” said senior investigator Samer Tohme, M.D., surgical oncologist at UPMC Hillman Cancer Center and assistant professor of surgery at the University of Pittsburgh School of Medicine. “Studies show that patients who are diagnosed at an earlier stage are more likely to have better treatment options, improved quality of care and longer survival.”

Their study, however, did not track survival rates or other long-term results.

The study was funded by the University of Pittsburgh Department of Surgery.