The CPPF has developed, validated and implemented assays for (but not limited to): abiraterone, alisertib, ATRA, belinostat, bortezomib, busulfan, cabozantinib, celecoxib, DMS612, docetaxel, erlotinib, fluorouracil, imatinib, indenoisoquinoline 400, 776, 744, iso-fludelone, ixabepilone, lapatinib, nilotinib, paclitaxel, phenyl-isothiocyanate, platinating agents carboplatin, cisplatin and oxaliplatin, temozolomide, tetrahydrouridine, vitamin D3, veliparib, vincristine, vorinostat, zebularine, and zileuton. This list is always being expanded and does not include the many compounds generated by medicinal chemists that have been subjected to animal pharmacokinetic and metabolic studies supported by the CPPF. These assays have primarily involved LC-MS or LC-MS/MS instrumentation, and have been applied to in vitro, animal and human PK studies performed at Hillman or elsewhere.

For example, iso-fludelone (KOS-1803) is a synthetic third generation epothilone in phase I trials. An LC-MS/MS assay from 0.1-300 ng/mL in 0.2 mL plasma was validated and is currently utilized to quantitate iso-fludelone in clinical samples. 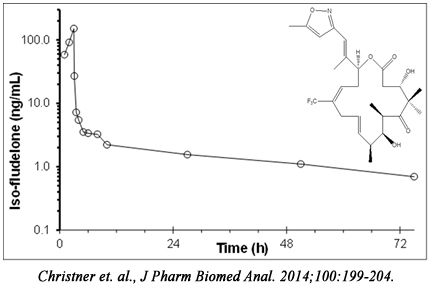 The CPPF has been critical to the successful competition for and completion of a variety of Hillman program projects funded by the National Cancer Institute (NCI). Among the most prominent of these are contract N01-CM-52202, “Preclinical pharmacology studies of antineoplastic and antiretroviral agents,” and its successor N01-CM-07014-39, “Preclinical pharmacological studies of antitumor and anti-HIV agents,” which is one of five such contracts funded by the NCI nationally to develop information in support of molecules proposed for subsequent clinical trials. The CPPF has developed and validated assays for zebularine, 2,2-dimethylbutyrate, benzaldehyde dimethane sulfonate and metabolites, gemcitabine and dFdU, tetrahydrouridine, 5-fluoro-2'-deoxycytidine and its metabolites, and the novel indenoisoquinoline topoisomerase inhibitors LMP400, LMP776, and LMP744. These assays have primarily involved LC-MS or LC-MS/MS instrumentation, and have been applied to animal and human PK studies performed at Hillman or elsewhere as part of NCI-funded toxicology programs working with the same agents sent to the Hillman for animal pharmacokinetic studies. With the exception of zebularine, all of the agents for which the CPPF developed assays and performed preclinical studies under this contract are currently in NCI-sponsored clinical trials; the assay and pharmacokinetic data generated by the facility served as part of the IND submitted to the FDA, and the assays continue to support the clinical efforts.

The CPPF has also provided important support to program project grant 5P30CA047904-160002, “Molecular Therapeutics and Drug Discovery Program.” The facility developed assays for JR-oxime, DA-3003-1, the Myc-Max disruptor 10074-G5, 23-TZD, kb-NB142-70, and kb-NB184-43, and then applied those assays to murine PK studies and for quantitation of parent compound in plasma and other biological matrices in preclinical models. The CPPF has identified numerous metabolites of many of the agents listed above.

Development of Biomarkers for Detection of DNA Damage Response

In addition to providing fit-for-purpose PD analysis, we seek to develop improved markers of drug response in patients. The majority of cancer therapies are DNA damaging and thus, there is a critical need for pharmacodynamic biomarkers to assess this DNA damage. ATM is a kinase that initiates the DNA damage response following exposure to ionizing radiation and select chemotherapeutic agents. In collaboration with multiple Hillman investigators, the CPPF developed a semi-quantitative immunoblot assay to assess phosphorylation of serine 1981 on ATM in biological samples. This assay was utilized to detect DNA damage in patients treated with stereotactic body radiation therapy (SBRT), and it was found that SBRT induced greater induction of ATM phosphorylation than H2AX in patient peripheral blood mononuclear cells.